BWMG member Iain Carruthers-Jones writes about his experiences of volunteering on our work parties.

Bark, bark, bark, bark! I come to and wake with a sigh. It’s the six o’clock dog. He’s loving his walk in the Water Meadows and seems to be just barking. Unfortunately, my bedroom window is within 25 yards of the path alongside the Linnet where he and his human companion walk and I have no option but to enjoy his joy too. To be fair, it’s not always 6 o’clock. Sometimes it is 6.15 and sometimes he has been either fitted with a silencer or his owner is running late and has not the time to walk Barky.

Why does the dog bark then? There’s no other dogs; no reciprocal barking. Anthropomorphising, I guess it’s just joie de vivre. Have you walked through the Water Meadows in the early morning? If I were a dog, I would probably bark as well. It’s lovely, especially when the sun is coming up and you can see the spiders’ webs and the grass glistening with dew. Perhaps because of its long history, it is easy to pick up a sense of peace and serenity. What was it like for the monks coming to the Crankles all those years ago? 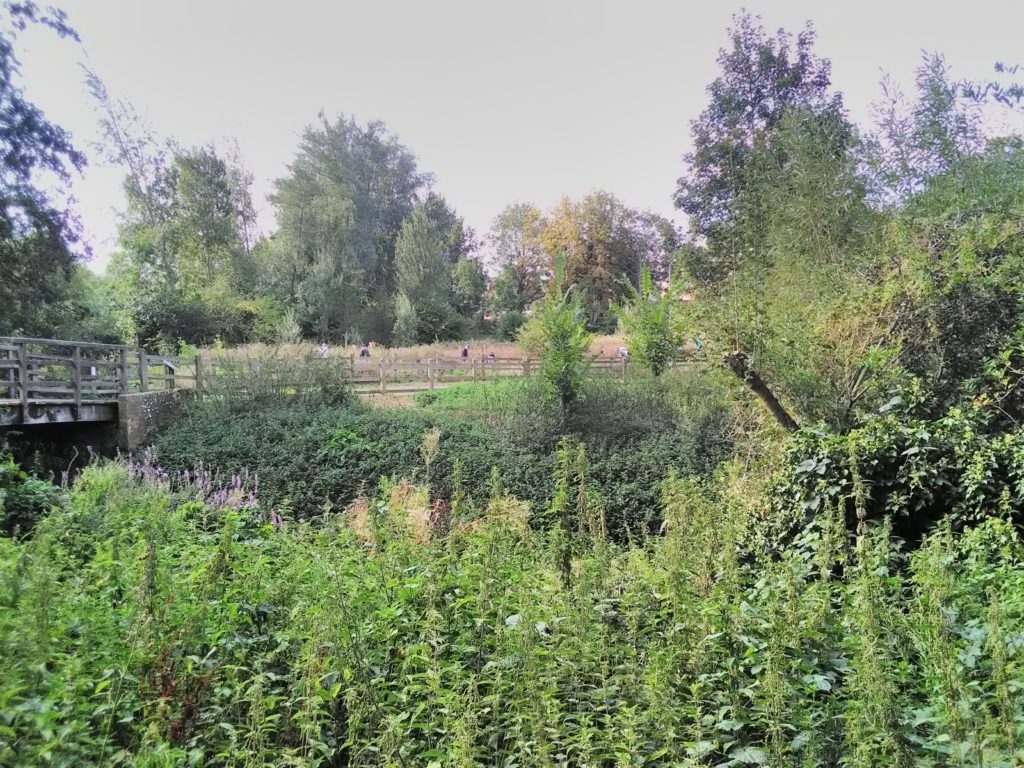 As a member of the Bury Water Meadows Group, soon hopefully to become a registered charity, one is supportive of the restoration of the Water Meadows and the two rivers, the Lark and the Linnet. Some Members have committed to go a step further and become part of the volunteer groups who help actively to manage the vegetation and the rivers. This work is done in association with the council under the leadership of Jillian Macready.

It might be interesting to update all Water Meadows Group members on the work being done by the volunteers. Perhaps it will encourage some members to become volunteers as well? That would be wonderful. So this is the first of a number of fairly regular posts. New (and young) blood would be great but all are welcome; there is so much we can do.

The two recent working parties’ output was clear to see. The first (Sunday, 8th September) concentrated on cutting back the faded meadow which had flowered in the Crankles. The second (Saturday, 21st September) involved the gathering up the cut vegetation, as much as possible, that had hopefully shed its seed back into the meadow as well as having dried out in the two weeks since the first working party. A second group worked in No Mans Meadow starting to clear thistles and nettles. Both days were hot, and it was thirsty work. The “tea breaks” were very welcome, especially since cake was on offer. There was a great sense of camaraderie (the chat and laughter level was high) and a sense of achievement was palpable. Thank you to all who took part.