A new idea called Chalk-Streams First has, our speaker claims, the potential to completely re-naturalise the flows in all of the Chilterns chalk-streams with potentially only a small net loss to overall public water supply. It is a scheme that could be delivered in the near future using as its basis infrastructure that is already planned for and costed in the water company management plans.

Chalk-Streams First is supported by a coalition of The Rivers Trust, The Angling Trust, WWF UK, Salmon & Trout Conservation and The Wild Trout Trust and they are calling for the idea to be included in OFWAT’s multi-million pound strategic review of water resources across the south east.

“ … that the draft Chalk-Streams First proposition, as put, identifies a feasible and a viable solution to the problem of chronic flow depletion in the internationally-rare and precious chalk-streams of the Chiltern Hills; it being to allow flows in the upstream chalk-streams of the Chilterns to run unreduced by abstraction, with water being taken from the correspondingly enhanced flows in the downstream Colne and Lee, and as needs may be from a range of other less-environmentally fragile sources to meet the needs of demand centres in the Chilterns, using Affinity Water’s already planned ‘Supply 2040 scheme.” 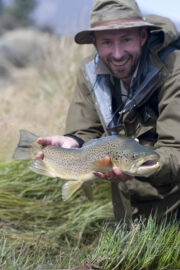 Charles Rangley-Wilson is a writer, conservationist and river restorationist. His most recent book Silver Shoals is about the natural and unnatural histories of five species of fish that have shaped British history.  Before that Silt Road was a story of the English landscape told through the history of a lost suburban river. The two before that, Somewhere Else and The Accidental Angler were anthologies of fishing and travel stories, as much about place and people as fish and fishing.

He is passionate about conservation with a particular interest in the history, restoration and preservation of chalk-streams.  He’s an Associate Advisor to WWF UK and  vice-president of the Wild Trout Trust and an Ambassador for the Angling Trust.

All welcome to this free webinar. Register in advance here and joining details will be sent to you.